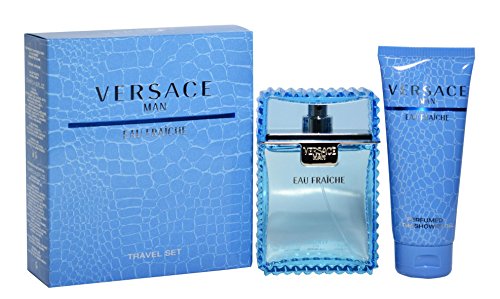 This new Versace Man version is fresher and more marine. While the original Versace Man had a sure Latino vibe to it due to tobacco note in its oriental surrounds, Eau Fraiche has a Mediterranean quality with some forested notes. The top notes of the fragrance begin with lemon, bergamot, rosewood, and rose, these notes flow into the heart notes of cedar, tarragon, sage and pepper. The final base notes are amber, musk, saffron and woody notes. Versace Eau Fraiche was shaped back in 2006. The nose behind this perfume is Olivier Cresp. Within this Versace Man Fraiche gift set there is a 100ml eau de toilette and a 100ml shower gel. Versace Man Fraiche is a fragrance for men is a fragrance that is to be worn during the daytime. Versace is an Italian fashion project house founded by the late Gianni Versace and continued by other members of the Versace family after his death. Debuting with a line of women’s wear in 1978, the corporation was an immediate success. A men’s line and the company’s first boutique in Milan shadowed in that same year. Gianni Versace chose the Medusa symbol as his company’s logo. The company’s comfortable clothing and accesories are characterized by influences ranging from pop art to classical Greek and Roman architecture.
Designer – Hersteller: Versace
Produktart: Geschenkset / Gift Set / Coffret
Inhalt: Eau de Toilette (EDT) Spray 100ml + Shower Gel 100ml
Geschlecht: für Ihn / for Him / pour Homme